Lyndsey sat on the reading rug all curled up on the big letter C.
Her fists were jammed into her eyes and she was rocking a fierce "bucket lip."
She was on time out. Her infraction? Kicking down a block castle.
Not safe. Not kind. Not allowed.

Not noted for her subtlety, Lyndsey was doing a fairly good job of letting all within viewing distance know that she was not happy with this decision.

Every so often, she would stop and scan her audience for a micro-second between eye jams. 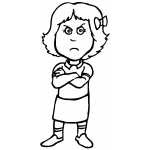 "Whatsamatta Lynds?", I ask sitting next to her.
"Nothing!"

I could go through a detailed history of all the "nothings" ever uttered that ended up being big somethings at this point, but they would all pale in comparison to this "nothing".

"No"
And not a sweet little, poor pitiful me no, but rather a head spinning, pea soup shooting no.

Lyndsey was hellbent on being miserable and would have dearly loved some company.
"Well, Lynds, you kicked over a block castle so you must be pretty upset about something."
"No, No, No!!!"
"When you are ready to talk, I'll listen."  I say to her calmly.

And with that, she lets out the biggest, most gawdawful soap opera tears...ever
"C'mere, Lynds", I say motioning for my desk.
"NOOOO!"


This is the part of my job that I like the least, mainly because there is not enough time to really get to the heart of the matter with Lyndsey. I would love to, but I just don't have the time to talk it out with her when there are 23 other students in need of my supervision. It's hard, but she has to make the decision to talk to me, as I am not a mind reader.

And that is a blessing
I could not even imagine forming a sentence above the din of  The Transformers, Hannah Montana and High School Musical.

But eventually Lyndsey does come to me.

It seemed the thing that inspired such a daytime Emmy worthy performance was actually an oversight.

No one had noticed her red sparkle shoes.

Maybe they are just too commonplace nowadays.

There are red sparkle shoes at every Target and at every Payless in every mall.

Red sparkle shoes don't inspire the same ooh's and ahhh's that they once did.

That's a shame too.

What could be more magical than the same ruby slippers that Dorothy wore? 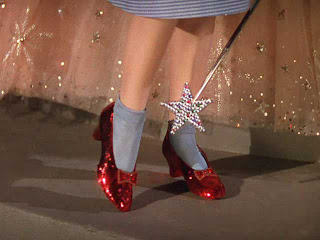 So I asked Lyndsey if she ever saw The Wizard of Oz.

Her eyes lit up.

"Oh yes, I saw that movie, and I have the shoes from it!"

She excitedly pointed a chubby finger down to the objects of our oversight.

"Yes, those do look like Dorothy's shoes!" I exclaimed loud enough to provoke a pricking up of ears near the Lego's.

And with that a small knot of kids looped around the reading  rug.

"Hey, Lyndsey has the shoes like the Wizard Of Oz!"

"Do you have that movie Lyndsey?"

"Did the witch scare you, she didn't scare me, no way, she wasn't real!"

"I didn't like the flying monkeys so much, one admitted and the apple throwing trees freaked me out." 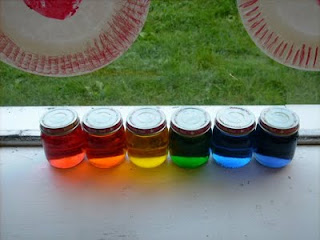 The laughter of little people erupts and just like that, the tears are all gone.

Somewhere over the reading rug there's a rainbow and, as if by magic, Lyndsey's shoes are a lot more sparkly.

Hug a teacher:
Jeff
Pseudonymous High School Teacher
Only A Movie
VodkaMom
Looking Forward and Back

If you're a teacher and you want to be added to the list give me a shout, I'll add you!

Please drop a penny in a poet's hat :

Popular posts from this blog

August 23, 2017
There was a haunting beauty behind her eyes, beyond her sorrow, a beauty that found its way into one’s heart and led them home.
2 comments
Read more

August 16, 2017
i can’t catch up with the breakneck blur of the birds in the backwoods
16 comments
Read more