August 17, 2010
I've noticed that certain parts of my history are becoming history...
My working history in particular.
This is a bit of a time capsule, something to remember before the bulldozers have their little way.

My very first job, at 16, was cleaning the public interiors of an old three story apartment building. I got paid $20 to mop hallways, vaccuum floors and scrub a 16 step marble staircase every Saturday morning. It was hard work, made harder by a woman who made it her duty to sit in the hallway outside of her apartment to supervise my mop skills. "Hold it straight!... Push, don't drag!" She never introduced herself, but I noticed that she wore green saddle shoes. So I called her Green Shoes. Green Shoes was always watching.
She taught me that while a good job doesn't always receive praise, a bad job never goes un-noticed.
I noticed that the apartment complex, my first job, is now for sale.


My second job, a year later, was a lot of fun. I was a runner at a popular resort/hotel, The Govenor Morris Inn. I had to make sure the buffet was stocked, the bar had everything they needed ( I used to sneak shrimp to the hungry bartenders) and I had to carry huge steamer trays of lobster up a really long narrow staircase from the kitchen to the dining room. It was high energy all the time but there were plenty of opportunities to sneak in a little goofing off. Sometimes celebrities and sports figures would be staying at the hotel. I've met Bob Hope, Susan Lucci and Mackenzie Phillips. I'm sure they don't remember me.
The waitstaff was a mixture of older "professional" servers who wore tuxes and spoke in classically trained voices, and drama students from nearby Drew University. Always cool and collected on the floor, they would let loose in the kitchen with the most filthy, vile and disgusting diatribes about the guests. I learned much of my colorful language from those starched collars. And the cooks, well...let's just say that there is nothing that you could say that would shock me. I thank them for that.
From The Governor Morris I learned that you don't have to like your guests, but you sure as hell have to love them.
The Governor Morris Inn that I knew is all gone, it's now the swelligant  "Westin Governor Morris".

My last stop on my disappearing resume is that of my favorite job...ever. I was an office manager for a podiatry group. Foot doctors. Ewww. Why do people always get skeeved by feet? They're truly wondrous things! Try walking around without them!
I needed to wear many hats working at the group. I had to be a mother, a daughter, a wife, a shrink, a judge, a referee and sometimes a fireman, for three doctors, all at different stages of their careers.

Decaf loved to putter around with the bubbies, housewives and diabetics. He'd smooth their callouses and corns and listen to them go on and on about local politics, healthcare changes and the lack of good theatre. He was a master of small talk. You could count on running twenty minutes late with him, always. I had to referee the waiting room and move him along with not so subtle hints..like putting the patients shoes on their feet. He was a take your time guy in a hurry up world. And probably the first person most of his patients had a conversation with all day.

Regular w/ cream.
The funniest podiatrist ever.
Sorta chunky but cute as a puppy.
His favorite word was snot. "all snotted up, that's a bunch of snot, this file is full of snot".
His patients ran the gamut from blue collar broken toes to Wall Street bunions.
I loved working with him the most, the office was always loose and full of laughter; just a regular guy, one you'd have a beer with.
But honest to Pete he was a slob.
He could wreak havoc in a treatment room that would have us scrubbing for months.
Ditto for the bathroom.
God did him a ginormous favor by making him so damned loveable, otherwise, as his wife put it, "you'd just want to tie him to your bumper and take the long way home"
His wife called the office constantly.
There was always some home renovation project drama happening, a toddler going to the ER for stitches or else she was in labor. I think she was pregnant for the three years that I knew her. So besides the office, I sorta managed them. I loved the Mrs. She had our backs because she knew what a handful the Mr. was.
I remember seeing her patented "you are shitting me" face appear as he handed out Lady Stetson gift sets to the staff one Christmas Eve.
By New Years Eve corrections were made.

Red Bull. Single, just outta school, high octane. Very Jersey Shore. Ladies loved Red Bull. Young ladies. I found him a bit arrogant but sensitive at the same time. Couldn't be bothered with Decaf's reschedules. He wanted big ticket operations and sports medicine. And dancers...bring him the dancing girls. He yelled at me one time for littering his schedule with "nip and chip" (geriatric footcare) I then scheduled him all community care patients ( folks living on the street) I felt that would be a little more exciting for him. I thought Decaf was going to have a heart attack from laughing at my doing that. Some days I flat out hated Red Bull's guts. But when his mother died and I saw him sitting in the dark, crying in an unused treatment room. He looked twelve years old.
Hard to hate that.
How could I not console that?
I stopped hating him and started mothering him.
And I still gave him smack-downs when he got too big for his britches.
I think that is what his mother would have wanted.

It was difficult to leave the podiatry group. I didn't want to, but my husband's company was relocating from NJ to NH. And so was I. I cried like a baby the whole way through New England.
It was sad to that learn the group is no more. Each doctor went off in their own direction, joined a bigger group...I heard Decaf has retired.
What did I learn there?
God.
What didn't I learn there?
I learned that it takes all kinds.
All kinds of people, personalities, situations, stories...coffee...to keep an office running smoothly. 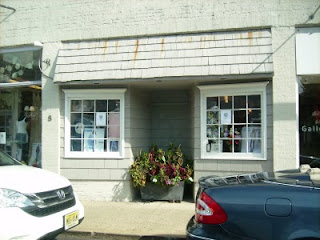 The storefront of what used to be the podiatric practice, it is now a dancer's shop.
Red Bull would have loved this
All of this that once was...all of this I am now.

Please drop a penny in a poet's hat :

Popular posts from this blog

August 23, 2017
There was a haunting beauty behind her eyes, beyond her sorrow, a beauty that found its way into one’s heart and led them home.
2 comments
Read more

March 31, 2012
when the dark presses
faith
scatters like paper
lit on fire

the body a vessel
the soul
a marionette
hijacked, voiceless

help me
if you can
reach me
here i am

August 16, 2017
i can’t
catch up with
the breakneck blur
of the birds
in the backwoods
16 comments
Read more